‘Love one another as I have loved you’

In the beginning everyone spoke the same language. In the land of Uruk, which is somewhere in Iran, the early human family, still of one tribe, devoted themselves to each other and wanted to keep each other safe. They had an idea that if they built a visible tower that could be seen far and wide, travelers who journeyed away could always find their way back home. 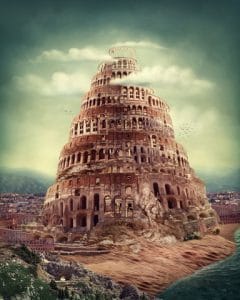 The entire tribe was united in building this tower and placed each brick lovingly in its place. By the time the third generation assumed the task of building,  the tower was still incomplete and it took almost a year to carry the next brick to its place. The grandchildren of the original builders didn’t carry the same devotion for the job, and it became a chore to have to build someone else’s dream. Without this devotion, the task consumed them with irritation, anger and resentment. One day a worker carrying the next brick fell, and they mourned the brick over the worker.

The landmark was the Tower of Babel. Shortly after the workman died, the now heartless workers pressed on to finish someone else’s dream. Because they had worked so hard, they felt entitled to more and decided to loot heaven, upon which God confused their tongues and they instantly lost the ability to understand each other.  Since the human family was no longer able to speak with each other, they dispersed across the earth.

The antidote to division, the way back to this language, is through forgiveness. In Matthew 18:21 we find the story of Peter coming to Jesus and asking him, “Lord… how many times do I have to forgive him? Seven times?” Jesus answered, “No, not seven times, but seventy times seven.”

Join us Wednesday evening at 7 p.m. for our Forgiveness Workshop and learn and experience four tools of forgiveness you can use to bring you back into the Mother tongue of your heart, where understanding and devotion restore us to sanity and wholeness.