Join us this Sunday, September 30, as we revisit some Unity Basic Principles. Everything we see in the world is viewed from a learned personal lens. We’ve been taught how to see, what to think, who we are and who and how God is.  I appreciate what Meister Eckhart, a 13th Century monk and mystic offered the idea to “let God be God in You” along with the advice to let go of trying to find God and realize “The eye with which I see God is the same eye with which God sees me.  God’s eye and my eye are one eye, one seeing, one knowing, one love.” 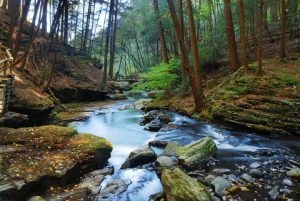 This is the mystical perspective that our co-founder Myrtle Fillmore, often called a Nature Mystic, experienced one Sunday as she attended a “basket meeting” way off in the woods. She went off by herself a little further from the rest and sat near a stream, surrounded by nooks and grottoes filled with silver grey mosses.  Immersed in nature, messages came to her directly and she went out of herself and become One with all.

This mystical experience was the beginning of her awakening and realization of the interconnection and Oneness of Life which because she followed this eventually became the Unity movement.

When I attended ministerial school and new Truth students came to the campus, Rev Robert Brummet would say “more grist for the mill.”

When one has had a mystical experience and follows Unity Principles, the Principles act to sand down the ego (our learned false identity), releasing us from limitations and bringing into our awareness the Truth of our Being, that each of us are a priceless Masterpiece.